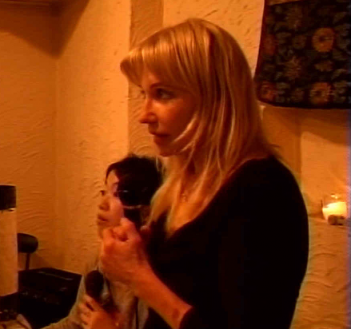 Nini Guerard has been a licensed acupuncturist, herbalist, minister and healer for more than 26 years. She is a certified Skenar practitioner, studying under famed Russian physicians, Drs. Tataina and Zulia.

As an acupuncturist at Kaiser-Permanente, after her resignation, she was informed by her supervisor that she had received the highest number of complimentary letters from her patients. Nini has been a member of Chinese Medical Academy, Japanese American Association and California Acupuncture Association and CAA.

Nini trained in crystal healing with medicine woman Tela Star Hawk Lake, who is the last of the female shaman-doctors of the Yurok tribe and author of several books including “Hawk Women Dances with the Moon “. In 1992, she studied with Dr. Baldwin and became certified in Spirit Releasement therapy the same year she was certified in Hypnosis at Sonoma State University. During her undergraduate studies at Stanford University she conducted experiments under Prof Jeffrey Smith on the effect of both love and criticism in plants; a duplication of the research experiments conducted by Russian parapsychologist Larissa Valinksky. The results of the double-blind study reinforced her conviction that love has a profound effect on all living things.

As a small child, Nini possessed precognitive abilities to sense and communicate with spirits. At 15, she began a formal study of color healing and communication with those who have passed on at the Spiritualist Society of Great Britain under the tutelage of Kathleen St. George, a well known and celebrated trance medium. This was to be a first in a series of magnificent teachers. In India, she studied Dr. Bansal’s work in Magnotherapy and since then has continued her studies in sound and color healing as well as deepening her communication with those who have passed on. She studied Qi Gong and acupuncture in China and became licensed to practice acupuncture in the state of California in 1988. In 2002 at the World Conference on Sound healing, Nini met reknowned Sound Healer Randy Masters and began to study with him. Randy Masters is currently on the faculty of the Globe Institute for Sound Healing in San Francisco.

For the last 14 years, Nini has studied, traveled with, and assisted world renowned healer and medical intuitive, Vianna Stibal. Nini is certified by Vianna to teach all of her classes and has received a diploma as Master of Theta Healing® and a Certificate of Science from Vianna’s Theta Healing Institute of Knowledge®. As a teacher, encourages her Theta students to become certified as teachers by Vianna. As a testimony to her dedication, amongst hundreds of THETA teachers, over one-third of Vianna’s first graduating master class students of Nini. Nini’s client base is International and her fame continues to grow. 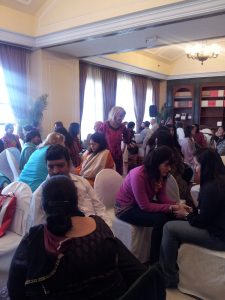 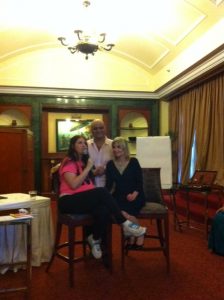 Nini with Vianna and Sumat in New Delhi

In 2007, VIANNA asked Nini to introduce Intuitive Anatomy to Israel for the first time, and years later, Vianna picked Nini and seven other Theta healers, out of thousands worldwide to be tested using NIH protocols, and the results were incredible. Both clients assigned to Nini received life changing experiences: One of the clients had a clot unknown to the three researchers or Nini that appeared on the CAT-Scan as a large mass in her brain prior to the healing session. After five minutes of Nini witnessing a healing of unconditional love while both Nini and the client were hooked up to brain monitoring EKG s, the researchers were amazed to find that the large tumor was now barely visible. Only the client had previously been aware of the clot which had been present for sixteen years. Neither Nini nor the researchers were aware of the tumor until the brain scan was performed. All Nini had been told to do was to witness unconditional love going into every cell of the client’s body as she had been taught by Vianna.

Although Nini has witnessed countless miraculous healings, this result was particularly gratifying since a fall by the client could have resulted in her death. It also proves beyond a doubt the phenomenal power of love to heal. In the first research project using NIH protocols for measuring the brain waves of the healer and Theta’s positive effect upon subjects the results were quite astonishing. In May 2014, a tumor appeared on a routine mammogram performed on Nini at Kaiser Permanente Santa Rosa, California. The same day she was contacted and told to return immediately. In less than 24 hours a subsequent high resolution mammogram screening showed no evidence of the tumor to the astonishment of the involved medical and radiological staff. The radiologist showed Nini the mammograms taken 24 hours apart and was unable to explain the absence of the tumor. Nini credits the disappearance of the tumor to the technique of Theta healing. The radiologist said there was no further need to retest and that Nini’s mammogram was clean.

Nini’s commitment to her clients and students is remarkable–almost one third of the first graduates from THINK INSTITUTE had taken classes from her. Please take a moment to read some of their testimonials as well as her case histories which can be found in Vianna’s book THETA HEALING®, pages: 315-316.

Nini had been invited to Japan prior to the Tsunami to teach. Refusing to cancel her plans, Nini went six weeks after the Tsunami to keep her commitment to teach in Tokyo and traveled to the apex of Japan’s radiation zone where she gave a benefit class to Tsunami victims as well as providing individual session at no charge. Despite being exposed to high levels of radiation her body shows no evidence of cellular damage.

In June 2011, Nini traveled to Tokyo Japan to present a class on Sound and Color Healing. She then travelled to do a benefit class and session in Sendai Japan for victims of the Tsunami and their families. The classes were a huge success and she will be giving the class again in Vancouver in September 2011.

The following year she traveled to New Delhi as Vianna’s assistant. Students who have studied with Vianna and Nini recognize Nini’s integrity and devotion to Vianna and her teaching, which she preserves in its purest form, making her unique among the many hundreds of Practitioners and Teachers. Nini’s greatest joy is to spread Vianna’s teachings, which she has been doing since 2000, and she continues her studies and travels with Vianna in order to learn wonderful new ways to help the suffering of others through witnessing the Creator of all that is.

Thank you for Your Patience, we will attempt to handle inquiries in 48hours.